Renault is putting two new projects for the second-life use of batteries from electric vehicles in the spotlight. Both ‘Advanced Battery Storage’ in France and ‘SmartHubs’ in the UK are aimed at helping to balance power grids as the share of renewable energy increases. 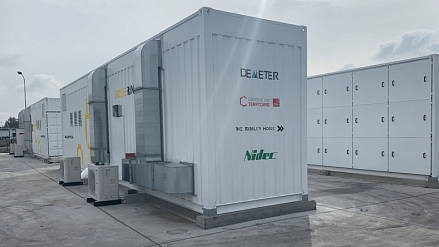 Renault first announced the Advanced Battery Storage project in 2018 as “Europe’s largest stationary energy storage system with spent batteries from electric vehicles”. The system is to be built at several locations and, according to current information, will have a capacity of almost 50 MWh.

The first energy storage system with 4.7 MWh has now been commissioned at the Renault Douai plant. Whereas two years ago there was still talk of sites in France and Germany, and specifically even in a former coal-fired power plant in North Rhine-Westphalia, Germany, there is no longer any mention of these locations in the latest press release. Renault merely speaks of “several French sites”. The restriction to France could also explain why the company is now aiming for a total system capacity of just under 50 MWh and no longer at least 60 MWh, as in the announcement of the 2018 project.

The Douai plant now houses several containers supplied by cooperation partner Nidec, which contain both old vehicle batteries and new stock units for after-sales use. The batteries are charged when demand for electricity in the grid is low and rereleased when demand is high, thus stabilising the grid. In addition to Nidec, the project partner is also the German service provider The Mobility House.

The second project, called SmartHubs, is being implemented by Renault together with Connected Energy in West Sussex in the south of England. Renault’s second-life batteries will be operated there along with other technologies as part of a local energy ecosystem to provide cleaner and cheaper energy for use in social housing, transport, infrastructure, homes and local businesses.

The two companies have been collaborating for some time on the integration of spent batteries into Connected Energy’s E-STOR energy storage system. The current project also builds on this: At SmartHubs, several E-STOR systems equipped with Renault batteries will be installed at industrial and commercial sites. Thanks to their storage capacity of 360 kWh, they will help the sites equipped with solar panels and chargers to reduce their energy costs and optimise the use of renewable energy. In addition to the above-mentioned E-STOR systems, the partners also intend to build a huge one with about 1,000 Second Life batteries to store 14.5 MWh. This should be able to supply 1,695 average households with energy for a whole day.

The SmartHubs project is one of four projects initiated by the British government to help design the energy systems of the future. The project consortium includes Connected Energy, Moixa, PassivSystems and ICAX, as well as Newcastle University, West Sussex County Council and Innovate UK.

These are not the first projects of this magnitude for Renault. On the French Island of Belle-Île-en-Mer, the system will combine a car-sharing service with EVs, local solar energy storage and an intelligent charging system. Renault is converting used batteries to power the largest holiday resort on the island. Besides, in collaboration with the energy supplier Empresa de Electricidade da Madeira, the French car manufacturer is known to have drawn up plans in 2018 to turn the Portuguese Atlantic island of Porto Santo into a “smart island”. Electric cars, second-hand batteries and V2G (vehicle-to-grid) in combination with “smart” charging will be used there. The Mobility House is also on board for this project.