The pylon of the Signature Bridge is the tallest structure in Delhi and is double the height of Qutab Minar. It also has a 154-metre high viewing box, which is going to be the selfie points for visitors. It shortens the travel time between north and northeast Delhi.

The construction of the bridge was delayed due to multiple reasons such as lack of man power and financial difficulties. However, it was finally completed and inaugurated on November 2018. The delays and setbacks in its completion were totally overshadowed by the illumination of the bridge with LED lighting on the eve of its inauguration. The government has asked DTTDC to install permanent lighting equipment on the bridge so that it will be illuminated throughout the year. As of now, the bridge has been installed with temporary lighting.

The concept behind lighting the bridge is to have the iconic structure illuminated throughout the year. On special occasions, such as Independence Day, it will be lit with the tricolours. Also, the idea is to light it up on special global occasions in order to acknowledge and recognize causes similar to the manner in which other famous structures such as Eiffel Tower are lit. 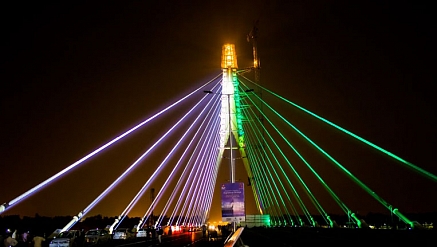