The safety of crosswalks lies in the right lighting

The number of registered vehicles in our territory increased by 48% compared to 2008! Currently, it is more than 3.2 million vehicles, which is clearly reflected in the density of vehicles on our roads, as well as the associated accidents.

The way we can help reduce this unfortunate statistic is by maximizing driver attention to the crosswalk section. The ideal scenario is if the driver is additionally alerted to the incoming pedestrian on time and is able to adjust his behavior accordingly.

The solution is based on a system of advanced technological devices that consistently form the so-called Safety crosswalk.

„It is primarily LED lighting installed on both sides of the road using special asymmetric optics. Technological design, which is the quality of the luminaire is a particularly important aspect in this case in order to avoid undesired glare of the drivers as well as to achieve a positive contrast of pedestrian lighting.

Secondary, the crosswalk lighting is complemented by active safety LEDs in the roadway. These are switched autonomously, whenever a pedestrian enters a crosswalk. Thanks to the advanced sensor system, which is powered by an external battery pack along with the LED buttons, this system works continuously and independently of the public lighting power supply, ” said Dušan Kozic, Managing Director of ECO-LOGIC Ltd., which specializes on advanced LED lighting systems.

With this advanced system solution, drivers' attention is constantly increased throughout the day and night. Last but not least, a positive driver habit is created and the accident rate on crosswalks in the city or in the village is largely eliminated.

Reference crosswalks, those that are technologically on high level are in operation for several years in cities such as Trenčín, Senec, Šaľa, or Malacky.

“The city of Trenčín has already realized nearly twenty crosswalks with advanced lighting, including adaptive LED buttons. The inhabitants of our city express their satisfaction and feel increased security in these crosswalks. For us it is a clear signal that the solution has a clear benefit for the safety of the inhabitants and we will apply this type of lighting to other crosswalks in our city, ”said Ing. Jaroslav Pagáč, superintendent of Trenčín.

In the first step, the city should process a passport (audit) of crosswalks in its territory, which maps every crosswalk and divides them into groups based on priorities.

Consequently, it is advisable to draw up a timetable for the implementation of crosswalk lightings according to the financial possibilities of the city and to prepare project documentation.

The actual implementation of crosswalk lighting is a relatively fast building action, not too expensive but many times with a lot of benefits for the safety of our residents. 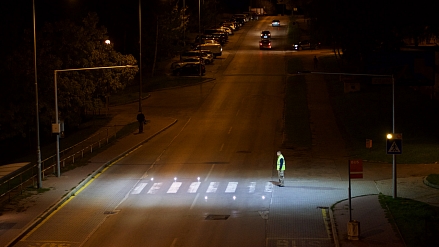